SATA Azores Airlines: How to get to the Azores?

Sandrina Rodrigues
Blog » Travel » SATA Azores Airlines: How to get to the Azores?

Preparing your trip to the Azores? In this article, we show you all the routes of the Airline of the Azores that will bring you to paradise in the middle of the Atlantic Ocean!

The Azorean airline has flights from various destinations to the Azores.

Routes to the Azores

By 2022, SATA Azores Airlines will have new routes, such as Barcelona, Bermuda, Düsseldorf and New York to Ponta Delgada, among other connections to Terceira Island.

From Barcelona to Ponta Delgada, Azores Airlines connections will start from June 1st until September 30th, 2022, every Wednesday and Friday.

From Lisbon, for example, Azores Airlines has direct flights to 5 islands of the Azores: São Miguel, Terceira, Faial, Pico and Santa Maria.

From June 1st to October 29th, 2022, Azores Airlines will have a regular connection on Wednesdays, Thursdays, Fridays and Saturdays between New York and Ponta Delgada.

Check out the airline’s new routes.

Established in the Azores in 1941, and with more than eighty years of History, SATA Group has at its core the depth of the Azorean soul and is committed to overcoming the archipelago’s isolation.

Composed of two airlines (SATA Air Açores and Azores Airlines) and an aerodrome managing body in the Archipelago of the Azores, the SATA Group has affirmed itself as an international airline that embraces the mission of building Atlantic bridges between the Azores and the world.

SATA Airlines currently operates a network of regular national and international routes, playing an essential role in the economic and social development of the Autonomous Region of the Azores. 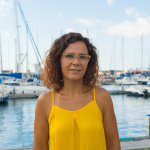 Poço Azul: The famous Blue Lagoon of the Azores

Best Beaches in the Azores Islands

Algar do Carvão: Inside a Volcano in the Azores

Covid-19 in the Azores: Cases, stats, rules and restrictions

Lagoa do Congro: The Green Wonderland in the Azores

Ribeira dos Caldeirões: A Remote Nature Escape Accessible for All

Monte Palace: The Story of the Abandoned Hotel in São Miguel Island, Azores

Lagoa do Fogo: One of the Most Picturesque Lakes in The Azores

Caldeira Velha: The Natural Monument to visit in the Azores

The Weather in the Azores in May: What to Wear and Do | Travel Guide

Flights to the Azores

The weather in the Azores in April: What to Wear and Do | Travel Guide